Shaking Up Your Followers

Follower (noun): someone that a character has inspired (or asked) to come work with them or assist them for an extended period. 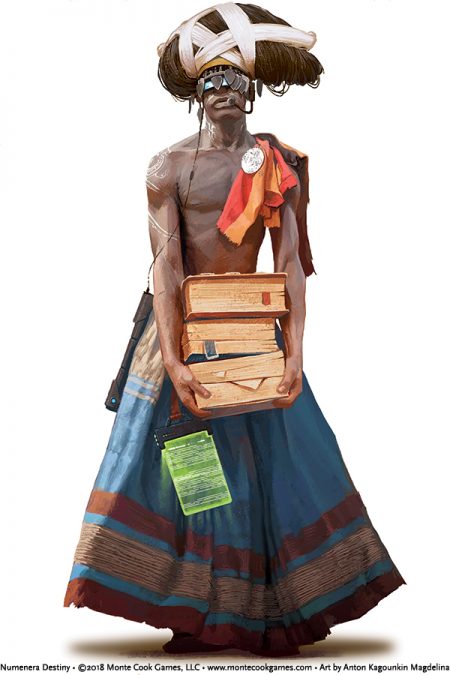 The concept of followers has been part of Numenera since its inception. Foci like Leads and Controls Beasts allowed characters to gain nonplayer characters or creatures that would help them in a variety of situations. But as we revisited the follower rules while working on Numenera Destiny and Numenera Destiny, we knew we wanted to evolve the concept of gaining followers into a global followers system that every player character could use. So we surfaced the previously foci-specific rules to create just such a system, which appears in Numenera Destiny. That said, we went through a couple iterations before settling on a system that spoke to the widest range of needs.

But after playtesting, we decided that dividing the followers by profession and proscribing exactly what a follower could help with based on that name was too limiting. Maybe it seemed fun to get a baker follower, but really, wouldn’t it also be nice if the baker could grant a PC an asset to perception tasks rather than just… baking? We decided to open up the concept a bit more, and give the PCs more of an opportunity to get the follower they specifically wanted.

The next draft of the follower system—and the one that ended up in Numenera Destiny—dispenses with listing followers by profession and one associated skill. Instead, the PC chooses the specific tasks that a particular follower is able to help with. The number of tasks a follower can help with is determined by the follower’s level, which usually starts out at 2. For instance, a level 2 follower that the PC wants to use as a spy could grant the PC an asset on two different tasks, one being stealth and the other deception. Or the PC might decide that they want the follower to ease tasks related to disguise and forgery. It’s up to the PC to decide which modifications they want when they gain their follower. Followers cannot help with tasks that they don’t have modifications for (because for the purpose of helping, followers are treated as if they had inabilities in all other tasks).

Another problem with the first draft was that it didn’t provide a route for follower progression. That didn’t seem ideal. So when we iterated, we introduced rules allowing followers to increase their level by one each time a PC advances two tiers. When the follower gains a level, the PC also chooses an additional modification for the follower.

Finally, followers are still NPCs. When a PC isn’t around, they’re just like any other NPC with modifications. An NPC follower’s modifications increase their effective level for associated tasks by one step. For example, the level 2 spy follower noted above, with modifications for stealth and deception, attempts stealth and deception tasks as if they were level 3 and all other tasks as level 2. Which means that if the PC wants to send their spy follower to gather intelligence on a newly discovered abhuman encampment, they can do so.