Ahoy! The Owl of Lysia is a Cypher System campaign on the high seas of Gallyca with a cast of rascals. The game master, Marsie Vellan, has been playing and worldbuilding in this custom setting for many years but has recently taken it to the big stage: MCG’s Twitch channel. 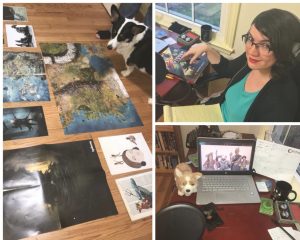 Marsie Vellan is a 29-year-old human actor living in Baltimore, Maryland. She’s been gaming for roughly six years, and supplements her experience with a firm background in improvisational and immersion theater by more than a decade. There’s nothing more she loves than creating a story with friends—it’s perhaps the most intimate thing she can think up. She enjoys playing many different RPGs. Marsie is running her first streamed game on Twitch: The Owl of Lysia.

Darcy: You’ve been a storyteller or gamemaster in a wide variety of settings: home games, escape rooms, conventions, and rapid-fire demos at PAX Unplugged (where I first got to see you GM!). How is GMing online for an audience different?

Marsie: GMing online is very different in very subtle ways. At face value, it’s the same, but I think there’s some very important things that doing remote gaming can teach us.

One of these things I have noticed in live and home games that people tend to use sidebars to communicate with each other as a way of delegation, side roleplaying, and getting the bookkeeping out of the way. This is great for multitasking, but consider that this multitasking always creates two or more separate conversations happening at the same time. This kind of thing isn’t possible, or at least feasible, for streaming. While a character is talking to an NPC, there’s no sidebar. While characters are talking to each other, there’s no sidebar. Now, someone could always go to text to get these things done, but I think for the purposes of the medium of online streaming, it might be better to just let things happen in separate scenes. In effect what you get is something more akin to an episode on television.

The very important distinction is that everyone is listening at that point to what is going on with the speaking character at any given time. It’s beneficial for the audience because they’re not missing anything. The players are also not missing anything either, and for the purposes of shared storytelling, I think it enhances the experience and engagement for everyone. We can learn in this way to listen to our fellow players, and learn more about their characters. Even if our characters don’t care themselves, the players should be engaged with each other.

Darcy: I find I learn a lot about my GMing and new techniques whenever I GM in a new context. What have you learned from this experience?

Marsie: I’ve learned that I have so much more to learn (is that cheating?). It’s like the floodgates have been opened and this new wave of possibilities is just endless. Which, honestly, is great for Cypher System, because endless possibilities is the name of the game. But in reality: know your technology, play with it, if you don’t enjoy it now, make it routine until you get to the point where you do enjoy it. I’m going through that right now, having lived most of my life as a present-day luddite.

The Cast of The Owl of Lysia: 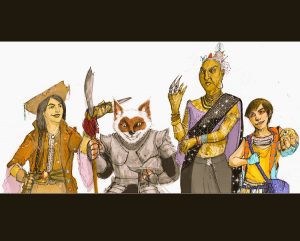 Darcy: You use a lot of handmade art in your games. Why? What does it provide for the gaming experience?

Marsie: I love creating a thumbprint. In fact, I endeavor to use a different drawing style for every game I play in or run. I draw my player’s characters, my own NPCs, and maps to give them a better sense of where they are in the world. For the gaming experience, it helps give context. Art creates footholds for details, function, and importance. Maps all convey information—but remember always this question: who is that information for? I can spend an hour detailing the overhead of a room the characters are in with four doors, a grand fireplace, an unremarkable and unset table. If they’re just moving through that room, there’s no reason to do anything else. However, if the main part of that room is the grand fireplace flanked with elaborate swirling columnar marble statues of gryphons arching over the mantle, and looking down at the characters sternly, and one of them is missing an eye, and it’s very clear there’s something mysterious about this set up, I’ll be spending my hour creating that. Art can help us to convey the context and help characters know what information should be important to them.

Darcy: You created a whole setting, and did some collaborative worldbuilding with your players. I’m impressed with how real and lived-in it feels. How do you approach worldbuilding, and what do you do to breathe life into it?

Marsie: I’ve been running this particular setting for about four years, and every time I have stripped it down a little more. This time, to the skeleton, the barebones I knew I’d need to get the feeling that I wanted, but with enough room for the players to leave their own unmistakable influences on.

I start from the countries and a general idea of what I want the region to look like and function as geographically. The next part is a negotiation between what real life analogs the country should harken to, and how its placement in the region benefits it, and also what that same placement would prevent it or hinder it from doing.

The most important part is the player input. I give my players as much common knowledge as possible, and allow them to infer logical histories and cultures based on what they are given, and incorporate those into the setting. Empowering the players like this helps build a world they more easily live in, helps to preserve genre and expectations, and breathes life into the game. As a GM I feel if I have to tell a player “no,” there’s something that we’re not communicating effectively, and we’re not living in the same realities. In a sense, letting go of the reins has led to building worlds where I almost never have to tell players no. That singular word is the thing that can stop the sense of immersion dead in its tracks. 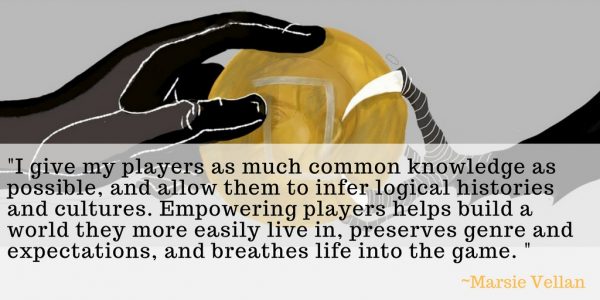 Darcy: What kind of prep did you do for the Owl of Lysia? What was the most useful prep?

Marsie: Aside from the art I make, I create flowcharts with multiple options, set aside NPC cards that I think are fitting for random situations that might pop up, and create a few original creatures to throw in as necessary: a few whimsical, a few terrifying, a few leave you null. Of course, in this setting, the original creatures and the NPCs might be one in the same. I think the flowcharts are the most useful, in addition to making silly voices and practicing things NPCs might say.

Occasionally writing up verbal descriptions, or the occasional monologue is very helpful as well.

Darcy: What would you tell someone who wants to stream games themselves?

Excited to stream YOUR game for the first time?

Watch Marsie’s stream of The Owl of Lysia so far on Twitch:


Watch The Owl of Lysia from MonteCookGames on www.twitch.tv

Tune in live on Twitch for the finale on April 29th: 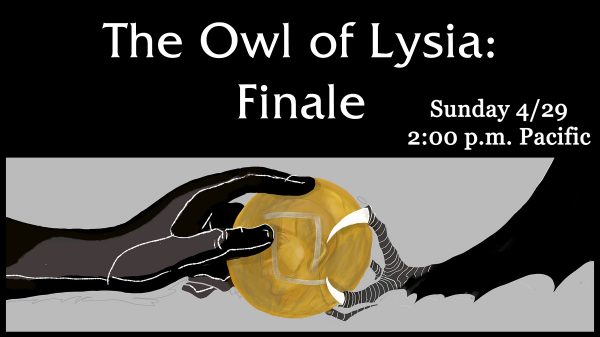 This entry was posted in Articles & News,Community Characters. Bookmark the permalink.