A Strange Answer to Fermi’s Paradox

The Fermi paradox is the apparent contradiction between the high probability of the existence of extraterrestrial civilization and humanity’s lack of contact with, or evidence for, such civilizations. Hence Enrico Fermi’s question, “Where is everybody?” Or, as Elon Musk recently asked on Twitter, “Where are the #%*> aliens?”

Scientists and science fiction writers haven’t been shy in coming up with hundreds of conflicting answers to this question. Here are just a few:

Simply put, the equation calculates the odds of us finding intelligent life in the universe. Care to guess what it finds? According to a new study published in the journal Astrobiology, with all the variables updated to represent our latest data, human-level intelligence should’ve risen 10 billion other times over cosmic history!

Despite that overwhelming result, we still have zero credible evidence that anyone else is out there. And it’s not like we’re not looking. You’ve probably heard of SETI, which has been seeking evidence of alien life in one form or another since a couple years after Sputnik launched. Fast forward today: figuring out how to detect aliens is one of the primary goals of the SETI Institute.

Trying to come up with a plausible answer to Fermi’s paradox is, if nothing else, an entertaining way to pass the time until we learn more. I’ve certainly spent a lot of my life reading and thinking about it, and sometimes even writing about it. Which is how I came to write the science-fiction novel Myth of the Maker. 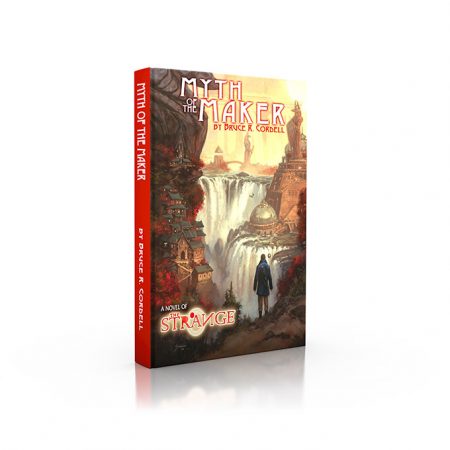 The genre-bending sci-fi novel Myth of the Maker has an all-new answer to Fermi’s paradox. In it, I predicate that we do have evidence of alien life staring us in the face. It’s a feat of awe-inspiring cosmological engineering that scientists call dark energy. No, not dark matter, which something different. I really do mean dark energy, which is a mysterious force that makes up nearly three-fourths of the universe, and about which scientists know next to nothing.

What if scientists aren’t looking at some previously undiscovered natural feature of the universe, as everyone seems to believe? What if dark energy is actually direct evidence of ancient intelligent alien life, an intelligent life so advanced that their construction, having fallen into vast disrepair over the span of deep time between then and now, is contributing to the accelerating expansion of the universe itself?

Yeah, that’s quite a leap.

But once the idea occurred to me, I couldn’t let it go. It became the basis for my next novel. Which meant I had to devise the reason aliens would want to build such a massive and an inexplicable thing in the first place. I mean, what was the dark energy construct originally for?

Well, what’s the nature of some of the most expansive and far-flung ruins we can find here on Earth from a fallen human civilization? If you answered “Roman roads” then great minds think alike.

In the context of Myth of the Maker, dark energy is a remnant of a universe-spanning system of “roads” used by beings who arose at the dawn of existence to travel between what was then a much smaller, but still vast and far-flung universe. In effect, they fashioned a network, a self-inflating and self-repairing artifact of immense size, which they used for travel and probably other things that we can’t imagine.

“Nothing was big enough to contain the network. Nothing, unless it lay in the quantum foam that lapped past the edges of the universe itself. Maybe the dark energy that underpinned reality was the shadow cast by this network, or maybe dark energy was the network, living in the wavelets of virtual particles and curled magnetic fields. Compared to the wind-tossed white-caps of our visible universe, dark energy constituted the unending depths beneath, vast and alien.” –Excerpt from Myth of the Maker

But what scientists call dark energy, characters in the novel learn to call the Strange, which is an alien data network. Intentionally constructed by technologically advanced aliens billions of years ago to facilitate intergalactic travel across the universe, travelers “uploaded” themselves into the dark energy web, then “printed” themselves anew at some distant star, without having to travel the light years between the two locations in the normal universe.

Then something went wrong. The builders lost control. In the billions of years since then, the Strange has continued its spread through the universe, causing havoc and ruin, and adding significantly to the universe’s ever-accelerating expansion.

I promised you a science fiction answer to Fermi’s paradox. Here you go: the dark energy construct is “haunted” by entities who were trapped within it when the network collapsed billions of years ago. These entities might’ve been the alien builders, other travelers, parasites, or malfunctioning AIs responsible for maintaining the system. It doesn’t really matter anymore because they’ve evolved into something far more anathemic; planetovores.

Any time a newly arisen civilization in the universe discovers the right energy domains, either with a quantum-computing advance, or when high enough energy states are achieved using particle accelerators, the Strange is pinged, and the planetovores that inhabit it discover a new entrance into the universe of normal matter. Every sentient species in the universe that doesn’t kill itself some other way eventually trips this trap.

“The disaster that nearly wiped out the planet began in our VR lab on Tuesday morning. Earth survived, if you’re reading this. But if someone else gets too clever with math like the six of us did, the same thing could happen all over again. And there’s almost nothing anyone can do to stop it. I’m really sorry about that, by the way.” ~Excerpt from Myth of the Maker

Question: Why, in this vast universe filled with billions of other galaxies, is there is no evidence for any other intelligent alien life?

Answer: Because of the Strange.

In Myth of the Maker, computer programmer Carter Morrison sacrifices himself and his friends, killing them and locking them in a virtual world—all to save the rest of the planet from certain destruction. Morrison’s friends have no idea what he’s done—but as the “planetovores” approach, they must come to terms with the fictional worlds they now inhabit, which serve to insulate the real world from the horrors without. Not all of them are satisfied with their forced martyrdom, either, and a man named Jason Cole—known as The Betrayer—seeks a way out of the fiction and back to reality, no matter the cost.

Bruce’s latest projects not related to drones include Expanded Worlds, Ninth World Bestiary 2, and Myth of the Maker.