And Other Fun Stuff: Flying a Drone

[We asked Bruce to describe something in his life that has nothing (or very little) to do with writing, just for fun.]

Science fiction fans wish they could grab a piece of the futures they read about—the good ones, anyway—and experience them in the present. Waiting is so hard. As I write this, I still don’t have my jetpack.

Which is why when I got my first smartphone, I was ecstatic. As I told anyone who’d listen, the smartphone was like having science fiction in my pocket.

Well, I still have a smartphone, and it’s actually much better than the one that first made such an impression on me. But smartphones have transformed from rare wonders to an expected aspect of modern life. The hedonic treadmill worked its adaptive magic on me, at least to some degree. Regardless, I remain something of an early adopter.

Which brings me back to flying, which I mentioned in the first paragraph—jetpack, remember? Of course, I’m not holding my breath. That exact wonder seems unlikely to grace my back anytime soon, if ever.

Thankfully, other ways to simulate flying exist. I’ve tried skydiving and bungee jumping. Overall, both were fun! But neither were really the kind of flying I’ve always imagined. They were more like barely controlled panic episodes complete with unintentional screaming and flailing, finally made bearable by an extravagant endorphin rush at the end. Worth it? Sure! But not something to do often.

But even as a kid, I was fascinated by the idea of virtual flying. A show I watched way back then featured a remote control model airplane with an attached movie camera. (The internets have failed me, and I can’t find the actual show title.) What I can remember of the show features a remote-controlled model airplane, which in and of itself was already a wonder to imagine. But this model airplane was even more special because the black dome mounted to its fuselage was a camera! For months after that, I’d go to sleep imagining that that plane was mine to control. It was amazingly entertaining, flying to and fro about the countryside, peering down from my electric eye in the sky.

Fast forward to just a few years ago, and the advent of consumer drones. Oh yeah, I was frothing at the mouth for this new technology. And thanks to a generous gift for which I’m still grateful, I finally got a drone of my very own, plus a drone pilot’s license to prove it: 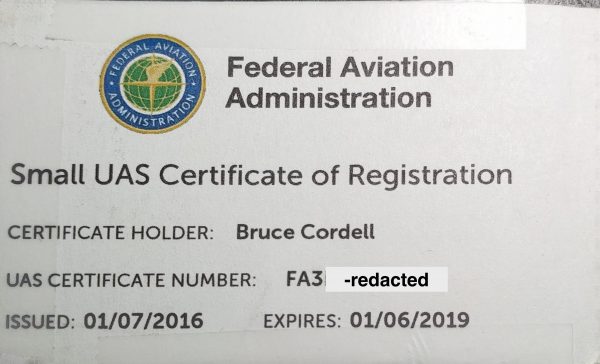 Guess what’s especially amazing about this remote controlled drone? It’s got a camera! Even better, the camera streams images real time to my controller. And just to bring this full circle, my controller is an app on the science fiction I already carry around in my pocket, in the form of my smartphone.

I take my drone—a Parrot AR Drone 2.0—up whenever my schedule is clear and the weather is cooperative. Since I live near Seattle where it rains a lot, and because I manage to keep a little too busy almost all the time, that’s not nearly as often as I’d like.

Each drone flight lasts at most ten minutes because that’s about how long the battery will hold a charge. I always keep a spare battery charged, too, which means I can get about twenty minutes of flying before both batteries are drained. But twenty minutes is perfect for a short outing.

I’ve made several videos of my flights using the drone’s recorded camera footage. Here’s one, where I test the limits of altitude, and maybe sense. And yes, there I am in the video, regarding myself through the camera eye of my drone.

Bruce’s latest projects not related to drones include Expanded Worlds, Ninth World Bestiary 2, and Myth of the Maker.