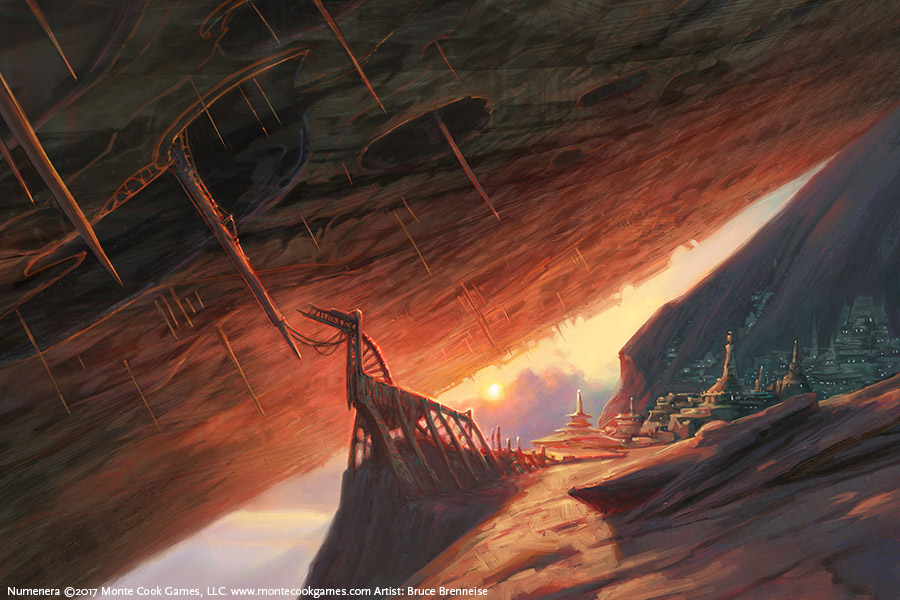 Ruins are everywhere in the Ninth World. That cliff over there? Its wide expanse is the edge of a million-year-old complex. The bald hill where camp was set? That weathered curve traces an ancient domed city. Even the soil under your feet isn’t natural; it’s the eroded remnants of a billions years of accumulated artificial structures ground back down into dust. Characters don’t have to go far to find ruins. And in such ruins, PCs can find amazing salvage such as cyphers, artifacts, and—for those who know to look—building blocks of the future.

Numenera Destiny, part of the Numenera 2: Discovery & Destiny Kickstarter, will bring you tools to make crafting and salvaging numenera a fun, engaging, and wondrous experience. While the book is not yet written (it’s only just been funded!), here are some details to look forward to:

As part of a regular game of exploration and discovery, characters already explore ruins looking for oddities, cyphers, artifacts, and other useful items left behind by previous inscrutable civilizations. However, they could do even more. They could look for essential crafting ingredients called “iotum.”

Iotum are special components that can be used to fashion unique objects, repair broken items of the numenera, and craft installations, artifacts, vehicles, and more Iotum comes in a wide variety of forms, including slivers of scrap, tiny motes trapped in force, fist-sized silvery canisters filled with colorless goo, and as a chaotic soup of bubbling fluid contained within etched stronglass canisters the size of small houses. Regardless of form, iotum can be salvaged from oddities, cyphers, and artifacts, as well as from other ancient devices of the numenera that characters find. Working devices and installations are more likely to be good sources of salvage, but characters may also be able to salvage iotum from scrap that was once part of such machinery.

Any time characters are exploring ruins of the prior worlds and have a chance to find cyphers, artifacts, or oddities, they are also likely to find sources of potential iotum salvage. Potential sources include machine scrap, functioning or dead installations, integrated machines, crashed or working vehicles, automatons, creatures, and similar objects and structures. Essentially, the same kinds of things that could potentially be salvaged for shins or cyphers could also be salvaged for iotum. Even scrap and debris of the right kind could contain valuable components, though it might seem worthless at first glance. Iotum could also be salvaged from cyphers and artifacts. The actual quantity of the source could range in size from a small pile of random junk to the entire bulk of a crashed vehicle. Size doesn’t equate to the potential value in components that the scrap might yield up.

Crafting the numenera is different than crafting things like canoes or wooden palisades. To craft the numenera, one needs both iotum and specific directions on how to use them, called plans. Plans are blueprints for creating powerful installations, weird devices, inscrutable automatons, and amazing vehicles. Such plans were likely developed by now-vanished master-crafters of the prior worlds. Plans specify which and how much of a particular component can be used to create each specific object or structure. These plans of the numenera can sometimes be found when iotum and other types of numenera is salvaged for valuables, though some characters—including Wrights—gain access to plans through constant study and discipline.

For example, characters with a plan and the necessary iotum can build an installation. Installations are discrete, fixed in place artifacts that provide some kind of service or that serve a community need, such as illumination, warmth, water, defense, offense, and so on. When crafted by a PC, installations are often used to aid a base or community. They can be as simple as a tiny power source for a few lights in a community (at level 1) to a massive device that that connects the surface of the planet to the airless void at of space (at level 10). Other installations might create water for a certain number of people, throw up a defense screen of a particular size, shift the community’s phase once a year so it doesn’t get stomped by a massive automaton that moves through the area, and so on.

Of course, the higher the level of an object of the numenera is, the longer it takes to craft. Even when Wrights apply their skills to the task, it takes months to create mid-level objects and structures of the numenera, and years to fashion those at the higher end of the range.

So if the characters decide they want to build a craft that could transfer their entire community to some other world, they know they are embarking on a task that might take more than a single generation to complete. In which case, the legacy of the ship’s creation would fall to their children, or perhaps even their children’s children.

Plans for mundane objects and structures are much different than those prized from the ruins of dead civilizations that came before. Instead of being found etched into a telepathic substrate, cycling in the memory of an integrated machine, embedded in an edited local universal constant, or stored in some other magical fashion, instructions for contemporary objects and structures are a result of the lore and practical knowledge developed by the people of the Ninth World.

Crafting something mundane is similar in some ways to crafting an item of the numenera, but far easier. So much easier, in fact, that many artisans, crafters, builders, and smiths don’t use plans at all, but instead rely on oral explanations, their own intuition and experience, or trial and error.