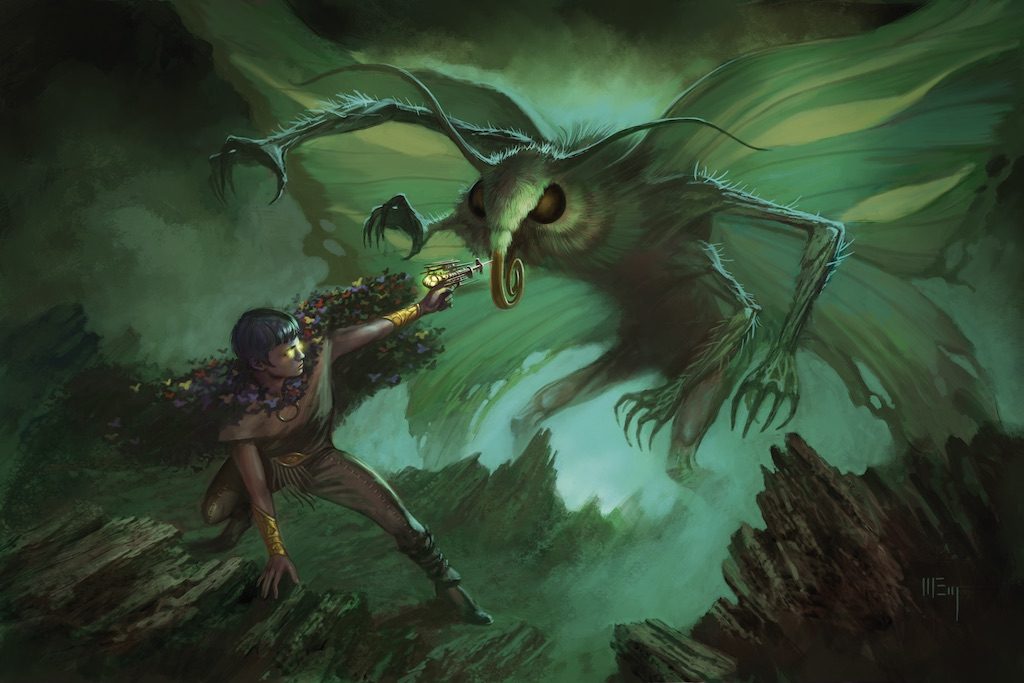 So you’re thinking about designing a new Cypher System setting? (Perhaps for  That’s wonderful! You’re in for a great time. Recently, Shanna and I hosted a seminar called Designing for the Cypher System at Gen Con 2017.

In our presentation we talked about methods for designing for the Cypher System that we use here at MCG to one extent or another, depending on the needs of the current project. At the highest level, we break the initial task of designing a new Cypher System setting into four smaller parts, which makes it easier to think about each one individually. Those smaller parts include:

In keeping with this philosophy, I’m going to discuss just one of the items from the list in this article, to make things easier and more comprehensive. You’ve probably already guessed it, based on this article’s title. Yep, I want to talk about Cyphers.

CYPHERS: AT THE CENTER OF IT ALL

A key component to any Cypher System game is the availability of cyphers for the PCs to continually find and use. But don’t think about cyphers as a requirement for your game; they’re a reward! Cyphers are a powerful tool for keeping gameplay fresh and exciting, because by their very nature, they’re always changing. We probably don’t talk about this that aspect enough. Cyphers = Excitement!

As you may know, cyphers are one-use abilities that characters gain and use over the course of the game. Cyphers set the cypher system apart from others because a character’s abilities can change from session to session, which means the unexpected is always around the corner.

In game design for any system, one of the most difficult issues of game balance is introducing new PC abilities. It’s not enough to think about what it will be like if a PC summons a T. rex once, you have to think about what effect it will have that the PC has the ability to summon T. rexes all the time. Maybe even every encounter. But cyphers, being one-use, don’t cause this problem.

Sure, a PC might end up with the ability to take down one really tough challenge with a wink or wave of a weird gizmo, but that’s just one challenge of many that the group will face. It’s fun, it’s invigorating, but it’s not unbalancing. Plus, cyphers are a way for a player to gain access to fun abilities without having to wait for months of game time to reach the level where it’s appropriate for the PC to be able to use a high-level ability. They can use a level 10 detonation cypher (that does 10 points of damage) even if they’re Tier 1.

So, that’s what cyphers accomplish in the game. But what about choosing the particular form of cypher that’s right for your particular Cypher System setting?

Cyphers take different forms in different settings and genres, and should somehow reflect that setting or genre, possibly even playing a role in that setting’s particular central conflict, history, or ongoing storyline.

Cyphers in your new setting could be a potion, a pill, or a device you hold in your hands. They could be magical, technological, psychic, transdimensional, genetic, or some kind of blessing or inspiration. It all depends on the setting. For the most part, what you decide is story, not mechanics, though if a cypher is weird enough, using it might have story consequences down the road (such as cyphers used in Gods of the Fall). On the other hand, it’s the kind of thing that’s important in a roleplaying game, but at the same time doesn’t actually change anything mechanically.

The question about why a cypher has a particular form depends upon why cyphers exist in the setting in the first place—what a cypher looks like depends on the story of its origin. In a modern setting, without overt magical or technological presence, lots of cyphers are probably subtle, without physical form, and instead take the form of inspirations, great ideas, and lucky breaks. More esoteric settings provide the opportunity for more interesting stories. A few examples follow. Use these examples to inspire the creation of your own interesting cypher story in your new setting.

Numenera: Cyphers are leftover relics of vanished civilizations so advanced that even their cast-off technology provides amazing effects, though probably rarely for the purpose the technology was originally slated for; such a purpose could well eclipse human understanding.

The Strange: Only quickened characters (like PCs) recognize cyphers for the special objects they are, as opposed to mundane objects like rings, glasses, smartphone apps, and so on. Their true origin has never been adequately described, but there are many theories, including the less than helpful suggestion that they might just be misunderstood elements of the dark energy network that underlies the universe (a network that people on Earth call the Strange). More likely, cyphers in The Strange are akin to recursions, the limited worlds sprung from the mind of human imagination. Like recursions, cyphers are born of fiction, and are able to alter reality in various incongruous and amazing ways.

Gods of the Fall: Deities of Rain, of Fortune, of War, of Travel, of Tricks, and of Death once watched over the world, all residing in their celestial realm called Elanehtar. All was well, until Elanehtar foundered. Burning and crumbling, it dropped out of the sky and smashed into the world like a vengeful falling star. Elanehtar shattered into hundreds of millions of shards now called cyphers. Each is a piece of heaven, a tiny miracle in the hand.

Predation: In the future, one of the safest and most common ways of carrying information and resources is via digital preservation inside human DNA. These encoded bits of information, which slipped through (or perhaps continue to slip through) time via time anomalies, are called cyphers. They embed themselves automatically into the viable DNA of a person who walks through or otherwise interacts with a time anomaly.

Currency of Souls: In the setting that Shanna, I, and the Gen Con 2017 audience designed together during our Designing For the Cypher System seminar, we decided that cyphers are actually human souls embedded in shells, tiny sea-life, or bits of junk from the world before it was destroyed. The characters in this post-apocalyptic setting are anthropomorphic sea creatures, and each time they use a cypher, it’s possible that they’re extinguishing a human soul forever, or releasing it from a hellish torture, depending on what one believes.