Playtesting The Stars Are Fire 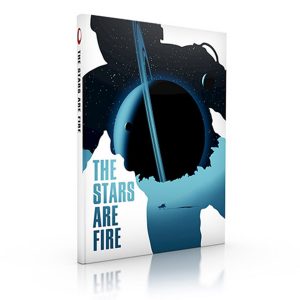 A science fiction tabletop RPG might be thought of differently than a fantasy game. And by differently, I mean implicitly more “difficult.” And that’s understandable. Most of us are familiar with contemporary things, not celestial mechanics, what a spacecraft traveling between planets might be capable of, what options someone with access to AR glasses or a mind’s eye implant really has, and what resources, general information, and special equipment might be available in an entire solar system’s (or galaxy’s) worth of moons, planets, and star bases.

The Stars Are Fire includes several suggestions for defraying this sort of generalized sci-fi anxiety. Some is common-sense advice, while other suggestions we include come directly out of our playtesting.

Metagaming is the term used when players use real-life knowledge about something to determine their characters’ actions, even though the character probably wouldn’t have that knowledge. This is sometimes frowned on in a tabletop RPG. However, as mentioned before, science is hard. In a science fiction game, we actually encourage occasional quick conversations—brief back-and-forths between the GM and the players—about what PCs in a future setting might know or might have access to in a specific situation. Doing so is really useful in empowering characters and allowing a scenario to move forward. It’s a way to move forward using player intent rather than asking for a specific action they might not know how to take.

For example, consider this following exchange based on one of our actual playtest sessions for The Stars Are Fire.

Bruce (the game master): Your salvage spacecraft decelerates hard into Saturn’s gravity well, the planet’s convoluted ring system like a cosmic bullseye. Your deceleration puts you dangerously close to the upper reaches of the atmosphere. But you find what you were looking for: a wrecked research vessel tumbles across the vast face of Saturn’s storm-whorled clouds, a dark speck above the planet’s glare.

Monte (playing a Scientist): Tumbling? Ok, we use our ship’s sensors on it to figure out what’s going on.

GM: Sure. A routine check reveals several things. The most important is that the tumbling ship’s orbit is decaying. It’s going to fall into Saturn. Your shipmind, Copernicus, calculates that the vessel is already dragging on the upper atmosphere. If nothing’s done, you’ve got only about an hour before that happens. If you’d arrived any later, you’d probably have missed it.

Sean (playing a Pilot): Do the sensors reveal if there are any life signs on the ship?

GM: Well, you’ve got sensors that return data across the entire electromagnetic spectrum; radiation, infrared, visible light, radio, and so on. You can learn a lot with that, but I’m not sure that “life” is something that your advanced sensors can detect. Although, let me think for a moment—

Shanna (playing a Soldier): It seems like detecting life would be something salvagers like us would prioritize. I mean, this wreck wouldn’t be a legal prize if any of its crew were still alive. Instead of salvaging, we’d want to rescue them. And of course, charge them A LOT for the resources we expend in the process.

Monte: Right! Either way, we get paid. Science isn’t cheap.

GM: Yeah! And I just thought of something. You know how spies can deflect a laser off a window and detect the vibrations on it from people talking inside and turn that into sound? Well, you’ve got just such a laser on your ship, but more advanced. And when you bounce a laser off the wreck and analyze the results, you don’t hear voices. But you do detect what Copernicus says sounds like really slow heart-beats. Three of them.

Sean: That’s three people who won’t be able to pay us if we let them burn up. How do we help?

Monte: Simple. We get into our spacesuits (I’m sure we’ve got a couple, right?), jump across, and pull them out of there.

Sean: Sure, but if this is a salvage ship, we must have some means to haul things around in space. Like, we must have a tractor beam or—

GM: Of course! Not a tractor beam, but your ship has deployable tow cables. The magnetic grapple is on a rotating cuff. So, if you hand-set the grapple at the center of the wreck’s spin, you’ll be able to use your ship’s drive to counteract Saturn’s gravity and atmospheric drag, at least a little.

Shanna: Great! Let’s pull this wreck into a stable orbit, then check it out at our leisure. I’ve got powered armor, which I think can double as a spacesuit, but—

GM: Copernicus, the shipmind, interrupts, “My calculations show the mass of the wreck is too great to save.”

GM: Copernicus continues, “However, you can delay catastrophic atmospheric decay by at least four hours.”

Monte: That’s better than nothing. It should be enough time to see who those heartbeats belong to, and what in the Void happened here.

The Stars Are Fire is available now!

Looking for more RPG advice? Your Best Game Ever is full of great tips and guidance on all aspects of the RPG experience.