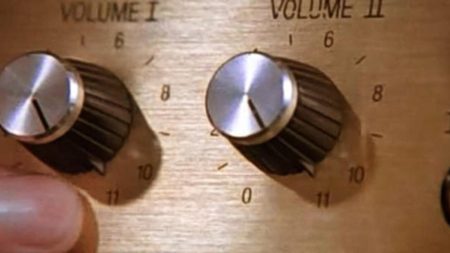 You’re gaming. You’ve got a good campaign. Good adventure. Good players. You’re having a good time. You’re on ten, all the way up, all across your gaming table.

Where do you go from there?

What we at MCG do is—when we need that extra push—we put it up to eleven. One better. One faster, one easier, one little step more fun. How?

A Great RPG Is More Than Books and Character Sheets

You have the corebook and maybe a stack of supplements? You’ve laserprinted some character sheets and gathered some good friends? You have a few dice handy? That’s great—but you can take your game further, and you don’t need a custom amp to do it. We’ve always believed in products that improve your game experience, speed things up at the game table and during prep, increase immersion in the game world, and make the GM’s life easier. These things aren’t always standard RPG books—but what they lack in conventional format they more than make up for in better gaming!

Decks that save you loads of time. Props that make your players’ eyes light up. Tools to keep your books, campaigns, or characters organized and easy to manage. Prompts that miraculously expand your ideas. Minis that bring characters and creatures to life, and fiction that brings the game world to life. We have dozens of great products that take your game to eleven.

And for a limited time only, they’re all on sale*!

In Fact, Everything Is On Sale!

For the next week, we’re holding a storewide sale—take 11% off books, games, and PDFs for Numenera, the Cypher System, No Thank You, Evil!, The Strange, and Invisible Sun. But we’re offering special deals—extra deep, can’t-pass-them-up discounts—on the great products you didn’t even know you needed. The extras, the non-book items, the things that really take your game up a step by making it easier to run, easier to manage, more immersive, more streamlined, and just more fun. That take it to eleven!

Here are just a few great examples. Visit the MCG Shop to see all the great items on sale now!

Your Numenera players have just discovered a couple of cyphers. You grab your copy of Numenera Discovery, look up the chapter on cyphers, flip to page 275, then reach for your percentile dice. You roll, look up the result on the table, then flip pages again. You find the cypher and read the description to the player, who jots down notes on their character sheet after scribbling out the notes about the last cypher they used.

Or you draw a card and hand it to the player. Done and dusted. No reaching for books. No scribbling notes. No waiting for the action to resume. The player holds on to the card, with all the details they need, until they use the cypher. 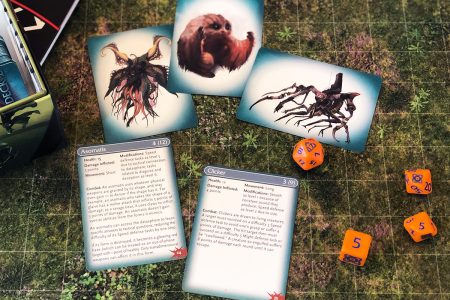 And it’s not just at the game table—generating cyphers in prep is just as easy. And if that’s not enough, the Numenera Cypher Deck, Cypher Deck 2, and Cypher and Creature Expansion Deck give you many hundreds of cyphers, and you can even customize your selection by building a deck with just the cards you want. It’s like a random table that goes to eleven!

Does this sound handy? We also offer creature decks featuring well over 300 Numenera creatures—plus decks for The Strange and the Cypher System. Key stats for the GM on one side of the card; a picture to show the players on the other.

Getting Into the World 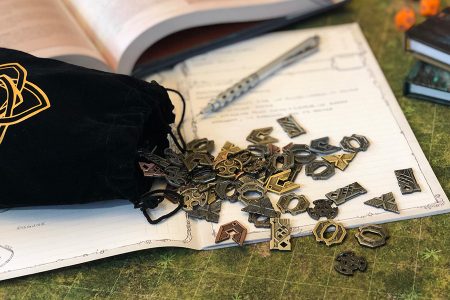 RPGs take us into fantastic new worlds—and nothing transports players into these realms faster than props. You’ll love your players’ reactions when you hand them a real newspaper clipping from the Invisible Sun Prop Set 2, or pay them for their latest Ninth World venture in shiny, hefty shins that make a satisfying clink as the players stack them on the table.

And between sessions? The Poison Eater and The Night Clave paint the Ninth World in vivid and unforgettable detail, pulling you into a world you won’t want to leave. Myth of the Maker takes you into the origins of The Strange and a tour of Ardyn and other recursions.

And don’t forget the beautiful minis available for Numenera and Invisible Sun!

The venerable character sheet has served us since the 70s. And, yeah, it’s free to download. But a few sessions into your campaign, and that gray laserprint is dogeared and tired. You’ve practically erased holes through it, and you’ve crammed notes and doodles into every corner. And it’s accompanied by an ever-increasing mish-mash of handouts, additional notes, and maps and drawings. All in danger of getting mangled or lost as they’re crammed in and out of your backpack every week. 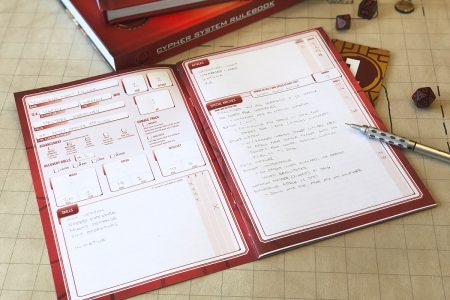 Doesn’t your character deserve better? Don’t you deserve better? The Numenera Character Portfolio and Cypher System Character Portfolio are character sheets taken to eleven. They aren’t free—but they’re pretty darn cheap (especially on sale!). You get more space for all the vital stats, plus loads of room for notes, drawings, maps, and doodles. And it’s not just about space—it also makes your game better, with prompts for the sorts of notes we all wish we took, but often don’t remember (like the other PCs in your party, important NPCs and locations, and so on).

Someplace to Keep It All

MCG’s titles are beautiful. Don’t you want to show them off? Slipcases and bookends help organize your stuff in fantastic style. And they’re on sale now! 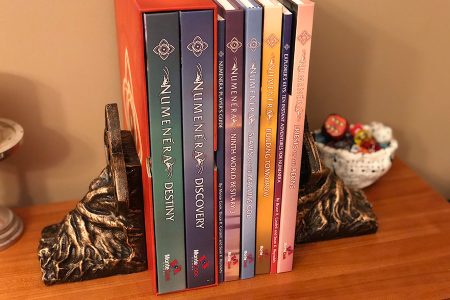 Ideas and Inspiration on the Fly

Awesome GM intrusions are like snappy comebacks: you always think of them about five minutes too late. What if you were never short of ideas? What if you had a stack of GM intrusion ideas at hand—100 of them, divided up for combat, social, and miscellaneous situations? 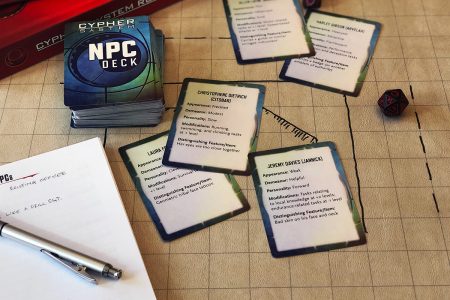 What if you had 100 NPC names, that you could mix and match with 100 descriptions, 100 quirks and memorable details, and so on? What if you had hundreds of prompts for Ninth-World weirdness at your fingertips, ready to go as you design that prior-world ruin or run an unexpected encounter on the fly?

Draw a few cards and pick one that works—or just let their suggestions unlock your own ideas and get the creative juices flowing! The GM Intrusion Deck, NPC Deck, and Numenera Weird Deck all help you come up with great ideas. Save time while prepping for the game and keep things flying at the table!

If you really want to take your game to eleven, Your Best Game Ever is 240 pages of great insight and advice. Monte really knows his stuff, and he’s backed up by dozens of experts who consulted on the book, representing literally hundreds of years of roleplaying experience. Player or GM, veteran or newbie, you will find ideas in this book that will make your game better. Guaranteed.

You might also look at resources like Story, Please! for No Thank You, Evil!, or the Directed Campaign for Invisible Sun, both of which give you ways to add new ideas to your game while making GM prep faster and easier. 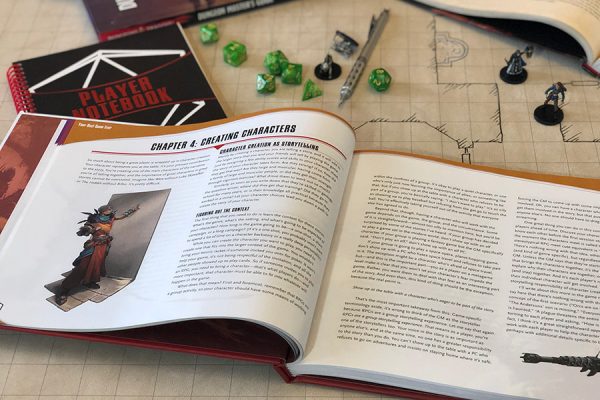 *The Goes to Eleven sale excludes some new releases.