MCG just released the new version of the Cypher System Rulebook. After revising the Numenera game (with the release of Numenera Discovery and Destiny last year), we realized there were some improvements we could make to the Cypher System as well. We didn’t want to change the rules of the game (effort, Edge, how you make rolls, and so on), but we knew there was a lot we could add in terms of player abilities and flexibility. Since the point of the CSR is that you can run any campaign in any genre, more flexibility is a great thing. 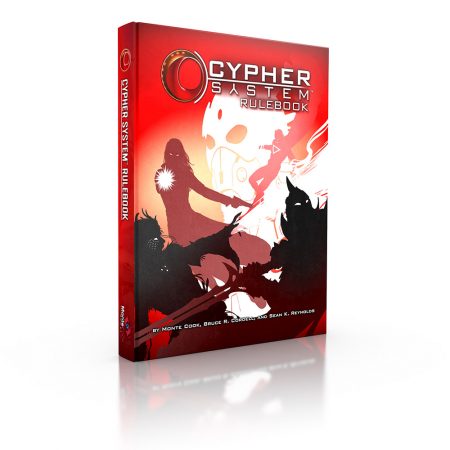 If you’re thinking about picking up the new CSR, or you’re getting it as one of your backer rewards, here’s a quick rundown of the biggest changes we made compared to the original book.

Player intrusions: This player counterpart to a GM intrusion first appeared in Discovery and Destiny. It gives players the option to spend 1 XP to affect the world in their favor, such as learning a town guard is actually an old friend or having a device that’s restraining you suddenly fail.

More foci: Twenty-four additional foci are presented in this book.

Foci creation rules: Customizing foci for a campaign used to be limited to swapping out foci from other options. Now GMs have fifteen pages of guidelines for creating custom foci, categorizing all the abilities in the book (like “energy manipulation” or “movement expertise” to help choose appropriate powers). They’re also ranked as appropriate for low, medium, or high tiers.

Centralized list of abilities: Previously, two foci that had the same ability (such as a fire blast, mind control, or training in a defense skill) used to repeat the entire ability’s description in both foci. Now all ability descriptions are in their own chapter, and the type and foci descriptions point to that chapter. This saved enough space that we were able to add a bunch of new abilities to this book… and then we added 16 pages to the book to make room for even more. 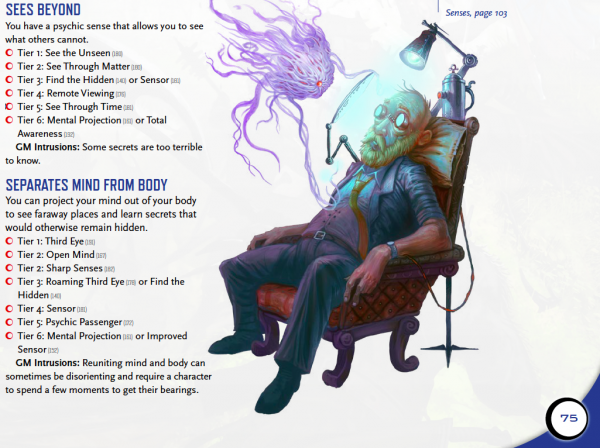 More ability choices for your focus: One big change we made in Numenera is that all foci get a choice of two abilities at tier 3 and tier 6, and we’ve brought that change over to the Cypher System Rulebook.

Additional genres: There are separate chapters with advice and guidelines for fairy tale, historical, post-apocalyptic, and romance settings. 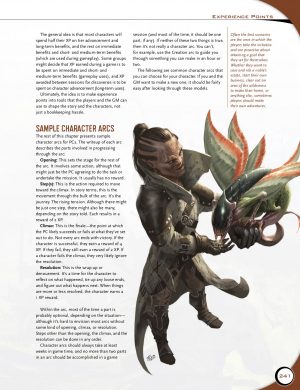 Character arcs: We picked up this idea from Invisible Sun and Your Best Game Ever because we liked how character arcs put more story control in the PCs’ hands. A character might choose the Revenge arc against a foe, another might start a business using the Enterprise arc, and a third might delve into their mysterious background with the Solve a Mystery arc. Not only do these character arcs help direct the story, characters earn XP by making progress in their arcs. (Read more about character arcs here.)

Updated cyphers: Cyphers are one of the core mechanics of the Cypher System, but having actual physical objects (like potions or alien gizmos) aren’t always suitable for the campaign setting. Now subtle cyphers are the default way of things—a bit of good luck at just the right time, momentarily achieving your true potential, and so on. The cypher descriptions in the book each say if they’re appropriate for subtle or manifest (physical) cyphers, and also categorizes some of their effects as “fantastic” for those running a realistic game. Plus, there are separate random tables for subtle, manifest, or physical cyphers to make it easier for GMs.

Of course, if you’ve got the original Cypher System Rulebook and you’re happy with it, great! None of these new things change the way the rules work. You still roll a d20, you’ve still got difficulties 1–10, and so on. Everything is still fully compatible with everything Cypher-related that we’ve ever published. You’ll be able to play a game with half the characters from the original CSR and half from the new CSR all at the table at the same time. The difference isn’t in how the game is played, but in the choices players get to create and run their characters.